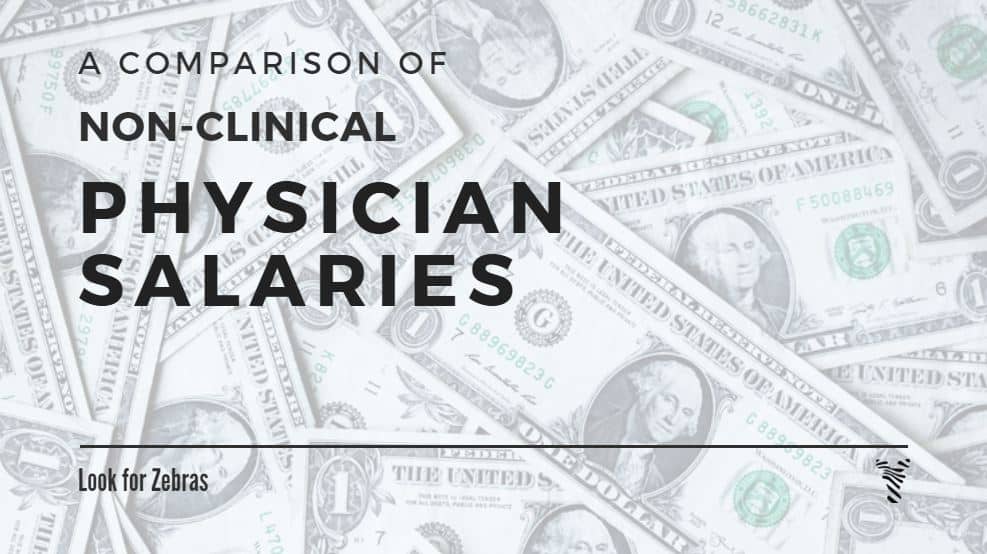 Uncertainty about income is one of the main hesitations among physicians considering a transition to a nonclinical position. Average physician salary by specialty is easy to find, but is largely drawn from surveys of physicians practicing in traditional clinical settings. This post aims to provide a ballpark physician salary comparison for the most popular nonclinical jobs.

Let’s take a look at average compensation for medical directors based on the field of work.

As you’d expect, average salary for a medical director increases with years of experience. After the 7-9 year range, though, the increase is really quite minimal.

It makes sense that larger companies have higher salaries for medical directors, on average. I see a few main reasons for this:

The industry type might also play a role in the differences seen here. For example, startup biotech companies often rely on medical input from consulting physicians rather than having a medical director on staff. So the representation of medical directors working in pharma may be skewed toward larger sized businesses in this figure.

Many health-related organizations have more than one type of medical director. This most often true of larger companies that have a need for multiple medical directors. In some cases they need physicians overseeing clinical or medical aspects of a number of different divisions or therapeutic areas, such as in pharmaceuticals. Other businesses, such as managed care companies, have a need for a lot of physician brainpower in a fairly focused area such as utilization management. It’s essential for them to have a hierarchy of medical directors.

No surprise here. Seniority is accompanied by a higher salary. Some large companies may have physicians in nonclinical roles with even more seniority than what is shown here. Chief Medical Officers make an average of about $350,000 as base salary. Other positions can have job titles of Vice President, Executive VP, or Associate Chief Medical Officer, for which the average salary lies between that of a Senior Medical Director and a CMO.

How to interpret a physician salary range

A few important notes on the physician salary data presented. The numbers presented are base salary. They don’t take into consideration additional cash compensation, which can include bonuses and profit-sharing. For some industries, such as pharma and managed care, these bonuses can be substantial. A 15% to 30% bonus based on personal and company performance is common. This tends to be more substantial the more senior the position is.

Generally speaking, without consideration for industry, a medical director receives an average cash compensation in addition to base salary of close to $39,000. The range, though, is sizeable from $8,000 to $80,000. That’s an order of magnitude difference.

The average salaries listed also don’t include benefits such as 401k, paid time off, or health, life, and disability insurance. These are somewhat standard for many employed positions; however, the differences in exactly what is offered can make for important differences between total compensation packages.

Comparing salaries between a broad range of job types

We’re comparing salaries for positions that most likely have very different responsibilities and levels of expertise among the physicians that hold them. I wouldn’t go so far as to say it’s an apples to orange comparison. But it is a red delicious apple to granny smith apple comparison.

When considering taking a nonclinical position as a physician, you should bear in mind more than just salary averages based on the factors shown above. Think about:

…among other personal factors that are important to you.

Medical Director is probably the most common job title for a physician in a nonclinical role. I’ve written before about what this title means in a nonclinical setting and the wide range of responsibilities it can come with. Due to its widespread use as a physician title across multiple industries, there are more salary data available for medical directors than other, less conventional titles such as:

Or, in some cases, a nonclinical physician has the job title of simply Physician or Medical Doctor. The relative scarcity of these other job titles for nonclinical doctors is the primary reason for restricting the data above to the title of medical director.

A word about the data

The salary figures presented here in both the text and graphs are taken from Glassdoor. Here’s what they say about the source of their data: Salary estimates are generated by Glassdoor using salary data from millions of U.S. employees and third-party sources using patent-pending machine learning algorithms. Salary estimates factor in recent user-generated salary reports for similar job titles at the company, its competitors and other employers for a specific location. While they get their salary information from “millions” of employees, keep in mind that there are around 295 licensed physicians per 100,000-population. So the majority of Glassdoor’s data are from non-physicians. Of the data generated by physicians, most would naturally be from those practicing clinically. The numbers presented above may include medical directors whose primary responsibility is clinical work, or who spend a portion of their time working clinically. There’s no way to know. I don’t think this makes the numbers I’ve presented any less worthwhile. When considering a nonclinical job, we need to start somewhere with salary expectations and negotiations. This is a good place to start.